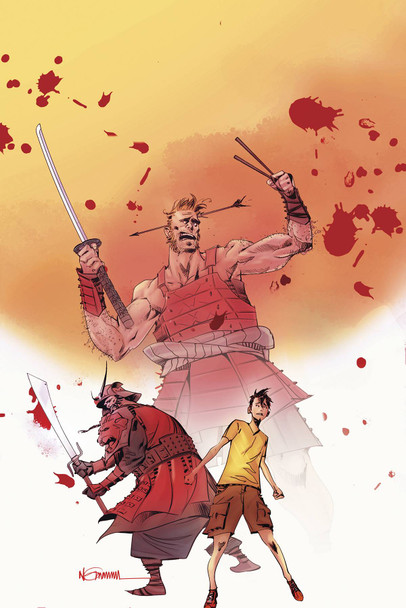 (W) Eric Nguyen (A/CA) Eric Nguyen
An ancient prophecy foretold of an outsider that would save the peaceful village of Inoki from an unstoppable army-a man who would confuse the people at first with his unconventional ways, but lead them to the light. Nathan Garin, Captain in the United States Army, known for his viciousness in battle on the American frontier, could be that man . . . if he weren't such an awful, drunken idiot. Now it's up to Japanese-American teacher Todd Parker to warn the good people of Inoki of Garin's true nature before he causes the very death and destruction they are counting on him to avert!
By Eric Nguyen, artist on Old Man Logan and Strange Girl.
Subscription Discount Levels Also Available:
Bronze Level - $4.68
Silver Level - $4.40
Gold Level - $4.13
Not a Subscriber? Find out about the benefits and more HERE!
***The Final Order Cut-Off is 12/19/22 by 8:00 PM Pacific. If you order this issue after this date, we cannot guarantee you will receive a copy.***
***If multiple items with different shipping dates are purchased on the same order, they will all ship together using the last release date as the shipping date. See more in our FAQS. Note - If a subscription option is selected for this issue, you will pay for the first issue now and then be regularly invoiced according to your preference of shipping on the Friday before the shipment takes place***
View AllClose